The aim for Nimble Servers is to disrupt the game server market by being the first game server provider (GSP) to let people rent game servers by the hour. Currently the only way to rent these game servers is to rent them for a full month. Our flexible approach offers many benefits other than the obvious potential cost saving for our customers; but I’m not here to give a marketing spiel so let’s move on!

For the uninitiated, a game server is something that people who play video games online connect to when they want to play with other people online; it basically shares what is going on in the game world with everyone who is connected to it. They are used in many of the most popular games such as Battlefield, most Call of Duty games, Counter-Strike, Minecraft and plenty of others.

A good place to start is how I got the idea. I got mine in a lecture on cloud computing as part of my Computer Science degree. The lecturer was explaining how in recent years the ability to rent computer servers on demand had changed the way a lot of new companies designed their systems in order to cope with sudden (and often short lived) increases in users.  I promptly stopped paying attention to the lecturer after getting a thought along the lines of: ‘Hold on, I can just rent these servers on behalf of people when they want them, slap the game server software on and sell them on at a profit, ka-ching!’ If only it were that simple…

The idea was very relevant to me – I had played a lot of the games that use servers, but rarely ever rented one myself due to the long term commitment and knowledge I wouldn’t be able to use it much. I was also in a pretty good situation to take the idea further since I was studying Computer Science so I had most of the skills necessary to implement it.

I think it is worth mentioning that I really wasn’t into the whole entrepreneur and business thing until the idea for Nimble Servers came along. When I took business studies way back at GCSE it was one of my worst subjects! However, my strong belief in my idea and my enthusiasm for it has led me to become very interested in how startups work. If I didn’t have that enthusiasm I don’t think Nimble Servers would have even made it into beta.

By Christmas 2010 I was all set to get started, but there was one small problem – I was in my fourth and final year of university and I had yet to start work on my thesis or revise for exams. Different people will have different opinions on what to do at this point. Some very famous and successful entrepreneurs have dropped out of university to work on their ideas. I don’t think I should give any advice on what to do in this situation other than to make your mind up yourself. I didn’t want to risk wasting the last three and a half years so I decided to stick it out until the end of my course.

Other than some early prototypes and a fair bit of planning, I didn’t manage to make much progress with Nimble Servers. In fact I very nearly didn’t get a chance to do much planning either. A large chunk of the marks in my final year were for writing a business plan – cool huh? Nope. The business plan had to be related to your thesis, mine was on smart card security and it was too late to change! The lecturer running the business unit wasn’t budging and said that only in ‘extreme circumstances’ people were allowed to write a business plan on something else. How does one go about creating ‘extreme circumstances’? Well killing off a relative or pet was out of the question and a bit irrelevant to the topic of my business plan so I entered in to a few business competitions to try and prove that I was serious about the idea. Fortunately I managed to get into the final of a competition run by Deloitte – apparently this was ‘extreme’ enough and I was granted permission to write my business plan on Nimble Servers.

This gave me literally weeks of extra time to plan and research for Nimble Servers. Trying to get permission to write my business plan on my actual business idea is just one example of many things that seemed to make it harder for me to spend time on my company. Anyone starting a company will encounter challenges; if you manage to tackle them then you will come out feeling a lot better and more confident.

Doing it on the Side

Soon after university I was offered a job at a company I like a lot. I’m sure this is a dilemma that many student entrepreneurs, or would-be entrepreneurs, face:

a)     Choose a decent career with good job security

b)     Take a risk and start/join a new company in an area you are passionate about.

The job I was offered was meant to start in less than a week so they needed a response from me the same day. I was lucky because the choice was made easier for me, a few days prior to receiving the offer I had just managed to secure a small amount of seed funding and free office space in London for two months.

I can’t say for sure but I may have taken the job and tried to do Nimble Servers on the side if it wasn’t for the office space and funding. I’m glad I didn’t though, because I can tell you from my experience of trying to do that at university and working on Nimble Servers since then that there wouldn’t have been any ‘side’ about it – I would have effectively been working two jobs in parallel. To illustrate: right after finishing university I was only working around 8 hours a day, after pushing that up to a bit over 12 hours each day I found I was doing twice as much useful work. By useful I mean things that really take the company forward rather than the necessary evil of legal documents and dealing with banks etc.

There is no doubt that it is possible to run a company alongside a degree or a different job but expect to work very, very hard if you want both to go well. It’s hard enough running a company without other things to worry about!

I’ve already mentioned that there are a lot of things that can get in your way, but there is also a lot of help out there in many different forms.

Earlier I mentioned a competition run by Deloitte; there are many other competitions for business ideas, particularly for ones related to technology. The office space and seed funding we got was through a competition with the lovely people at Mint Digital, wittily called the Don’t Be A Banker Scholarship. There are many others that I entered into but wasn’t so successful. Even if you don’t think you have a chance of winning (I honestly didn’t think I would come close in any!) the process of entering can be very beneficial as the competitions often make you ask yourself questions about your ideas that you wouldn’t have otherwise. Oh, and if you do win you usually get money and some publicity, what a bonus!

I thoroughly recommend finding a mentor, preferably someone with more experience than you who isn’t involved in the day to day running of your company. A large number of universities nowadays have excellent support for students or even recent graduates who have a business they want to work on. This can be a great way to find mentors or just other people to bounce ideas off.

One of the first things I did after starting to work on Nimble Servers was to keep an eye out for a co-founder. I believe the advantages of having co-founders outweigh any disadvantages; the pros and cons are all discussed at great length elsewhere so I won’t cover them here. I will however say that you should try and find co-founders that can bring skills or resources to your startup that you don’t have.

“If you’re not failing every now and again, it’s a sign you’re not doing anything very innovative.”

The important thing is to not be afraid of failure; if you are then you won’t try new and challenging things and will find it much harder to make your business succeed. As a student or graduate it is a great time to take these kinds of risks since you probably don’t have many commitments such as a mortgage or kids that depend on a steady income. I’ve got a sizeable heap of things wrong so far, but even if Nimble Servers eventually fails, I definitely won’t regret trying. 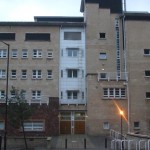