Can the Funding for Lending scheme help lending to small businesses?

At the beginning of August the Government launched the new Funding for Lending (FLS) scheme that will replace the National Loan Guarantee Scheme. The FLS is another attempt by the Government to encourage banks to lend to growing businesses, but to what extent will the scheme be more successful than its predecessor the National Loan Guarantee Scheme?

The Office for National Statistics announced at the end of Q2 that the UK economy had shrunk by 0.7%, further miring us in a double-dip recession. £80 billion of loans have been pledged for the FLS. The scheme will run for the next 18 months when it will then be assessed. Under the scheme, for every £1 of additional lending made by a bank, it will be able to access an extra £1 of cheap funding from the FLS. Those banks that reduce lending will have to pay higher fees to use the scheme.

Britain may be stuck in a double-dip recession, a fact that politicians, captains of industry and the media have never failed to remind us, but there are a small group of companies that are bucking the trend.

The CBI business lobby group has identified these firms as the type of company that Britain needs to get back on its feet. Nicknamed by the CBI as “gazelles”, they are mid-sized companies that are alert and move quickly. An increasing number of experts believe finding more gazelles is crucial to kicking life back into the economy.

RBS have already launched a similar scheme using Funding for Lending for small businesses, cutting interest rates on £2.5 billion of loans by an average of one percentage point.

Bank lending to businesses has shrunk by 17% over the past four years, in the three months to May lending collapsed by £3 billion. The Government has to be seen to be addressing this problem, as small growing businesses are the key to the economy. The Funding for Lending Scheme is probably the best attempt so far to encourage banks to lend, however there is no guarantee that the plans will address the core problem of companies’ reluctance to borrow in the face of a eurozone debt crisis, business confidence is another factor that needs to be considered.

It is encouraging as ever that the Government is trying reduce the business finance gap, but will the Funding for Lending scheme work? Probably not. At MarketInvoice we are of the opinion that the best way to boost SME growth is to give them access to a range of flexible finance options, such as those presented in the growing alternative finance sector.

5 tools to make your social media work for you! 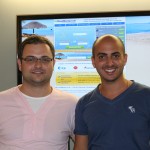