Is crowdfunding a viable way to fundraise capital for your start-up?

A few years ago I was told when raising money that I should look to get it from my triple F: Friends, Family and Fools. I did not think that was a particularly wise remark so I didn’t follow the advice.

Traditionally start up companies would raise capital to start up their business by going to Angel and Venture Capital (VC) investors to raise seed funding. Today this is still the most common way for entrepreneurs to raise capital investment for their business. However in the last few years a new fund-raising method has been gaining popularity.

Crowdfunding is a method of collecting money from a collaborative network of people. The internet has been made it possible for people to collaborate to fund projects in the commercial, social, and charity sectors.

Some of the more successful crowd funding websites include: Kickstarter, wefunder, pleasefund.us, crowdcube and megafounder. All these website use distributed network to raise money from the crowd to create crowdfunding for new businesses.

Organisations that want to use one of these crowdfunding services to raise funding starts by completing an application form that often includes a blurb or video about the startup project. The organisation describes the rewards that the people who decide to pledge money to their project will receive. Sometimes this is something tangible as getting their product at a cheaper price, or at an exclusive early release date. These rewards are instead of the equity share that a conventional investor would expect to receive in return for their capital investment in a startup project.

For example, the Kickstarter tech project called The Hidden Radio and Bluetooth Speaker,  a wireless speaker for your iPhone and digital radio, raised almost $1 million dollars in pledges in January 2012. This is The Hidden Radio promotional video.

The Hidden Radio is a great tech project which is perfectly suited to crowd funding, because people who pledge get a tangible reward for their money. I imagine it would be much tougher for a software technology startup to raise such funds because software is not something you can physically touch or get in the post (with the exception of a software game, which might be offered at early date to potential investors).

Here is another example, which is a social project from Kickstarter and is still currently active, looking for pledges, called The Kite Machine.The kite project is a great example of social project that would find it difficult to raise funds for their launch without crowd funding. This is The Kite Machine’s promotional video.

The final video is from Pleasefund.us, and is another social project. This is a theatre group based in south London, called The Last Refuge Theatre build, which is also still raising funds. Here is their video:

Crowd funding could be an option for any startup business currently being run on a shoestring. However, if you are considering crowd funding as an option for raising capital you need to think what reward you can offer to your funders. The people who give you their pledges will still want to get something in return. For more information, why don’t you check out any of the websites I mentioned above.

A cause for celebration 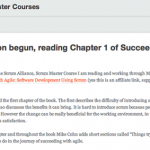 Is getting a professional qualification the right thing to do, as an entrepreneur?