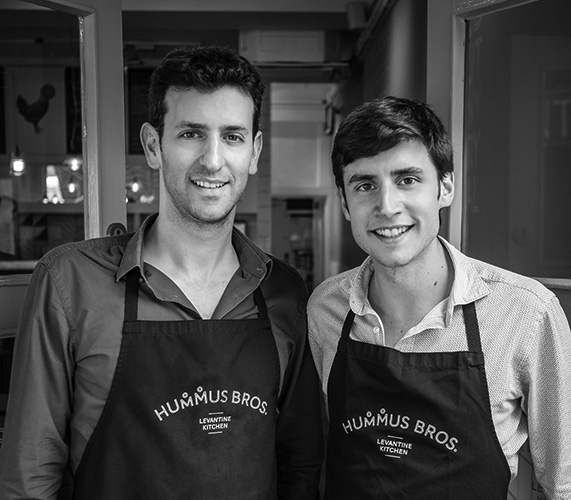 Tell us a bit about Hummus Bro’s concept and the company’s history.

I started Hummus Brothers with a friend from university, called Ronan. Whenever we have studied together, we would eat anything, literally anything, with humus that we could find in the fridge. And when we left the university, we did not know what it would be, but wanted to do something together. And then we fell for the idea: ‘ are there other crazy people that love humus as much as we do? So we went to the markets around London, and started to give away the product in order to find out what kind of response we would receive. As the demand for our product grew steadily, we then went to find our first unit in Wardour Street. Quickly we realized we got on the map in Wardour Street, which is the press district of London. Subsequently, we opened three more branches and more recently, started to operate in corporate restaurants.

Would you recommended to start the business with a friend?

It is always a good idea to start the business with a person who you are friendly with, however, there is much more to that. There are some friends who I certainly would not start the business with, and there are some partners that I would not be so friendly with. I do consider Ronan my friend and as a business partner, and the relationship has evolved a lot in the last 10 years.  This could potentially be compared to the marriage, as would you marry someone you are friends with? Or is it someone who you want to build a family with?  Maybe it is both, and this could also be applied to the business.

The Importance of Conference Calls for Business
12. 10. 2020 Guest Contributor 0 Com.

What was the biggest struggle in setting up the company?

There are so many issues that we have faced, however, the biggest issue was realizing how much of an emotional roller-coaster setting up the business would be. When I saw my friends go and work in the banking industry, when they leave work at the end of the day, they could physically and emotionally disconnect themselves from work. Whereas, when it comes to running your own corporations, separating your career and your personal life can be extremely sticky.

How do you plan to retain your good employees?

Staffing is always a challenge. When customers react positively or negatively, 90% of the time is down to the staff. We have got a number of incentive schemes in place: employee of the month, bonus for each of the shop- managers if they hit a certain number of sales and an individual who brings the most deliveries. Our goal is to include the staff as much as possible, creating the culture the want to be part of.

When it comes to hiring, is CV an important factor in determining whether to hire an individual or not?

CV gets you past the front door, however, the majority of the skills can be learnt, and after a few months in a job, most people will know the ins and outs no matter what their previous experience was. But a good personality and attitude is something you either do or do not have.

Do you plan to release another cookbook in the near future?

The first release was all about the sixty recipes that we serve in the restaurant and now we want to do one specifically on gluten- free food. A lot of people try to reduce the amount of gluten they eat,

In what supermarkets are you planning to sell your products?

It really pains me to see people eat low- quality humus from the supermarkets, and it is not only me that feels that way. The motivating factor of entering supermarkets is that some customers do not know the true taste of humus due to a current low- quality range of humus that is available, and subsequently prefer not to it. Secondly, the majority of the people use humus as a dip, however, it is much more than just a dip! In Hummus Brothers we serve it a base, you could also have it as a spread instead of butter, which is much healthier. There is education to be done, by telling people more about humus. Finally, current packaging in supermarkets looks all the same, cheap and uninspiring.

What strategies are you willing to introduce in order to sustain such a high level of demand in the next 5-10 years?

Firs of all, we are currently raising money using the Crowd2Fund platform, in order to open 2-3 new stores in London. We will continue to expand our corporate restaurants, however, two ultimate strategies: selling our products in supermarkets and opening a new franchise abroad.

Have you considered opening up a branch in UK, but outside London?

My concern opening a restaurant outside London is that I do now know the market well enough. In London, I know a sufficient number of people to gain advice from and I have a greater understanding where it would more or less suitable to open up the business. Whereas, in Manchester, Bristol or Leeds I am sure there are great places to open, but I as already mentioned, I do not know the market well enough.

Any last advice to anyone looking to start their own business?

My main advice is that you should not do it alone; you need someone to bounce the ideas of. Similarly, once you have passed the boot- strapping stage, hire someone to really run the day- to- day operations of the business. We should have done much earlier on! Interview with Scott Butler of ERP UK, Partner of the Green Alley Award 2015